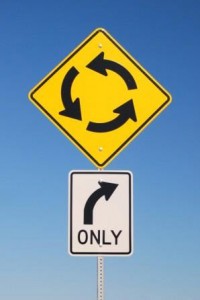 There is no doubt that these systems and processes are crucial to the effective day-to-day operations of an advisory firm.

But it’s akin to improving and tinkering with the performance of your car which is stuck on a road that goes around and around in circles. The firm might become more efficient but it does little to improve the firm’s effectiveness as new ground isn’t made.

The issue isn’t the systems, it’s the priorities.

Pricing is your highest priority whenever you seek change in your advisory firm.

The reason the majority of our advice clients have not made pricing their number one priority when seeking better productivity is historical.

Most founders started their firms seeking in the first instance survival before profits. As few start-ups can afford their founders (i.e. initially founders usually underpay themselves) initial pricing is primarily set relative to competition and founder’s recent experience, rather than how to best fund their hoped-for growth. Funding growth will be something they tackle ‘once established’ and rightly isn’t the immediate priority when compared to getting their fledgling advice firm up and going.

Those early pricing theories and habits are deeply etched in the DNA of advice firms as they subsequently attempt to grow. Objectively, it even appears logical for founders to stick with ‘what worked’ and helped them prevail against the odds which consign most of their fellow start-ups to an early grave.

Whilst initial pricing is more about survival, pricing for growth is more complicated as it has to cater for the trifecta of profitability, customer satisfaction, and team satisfaction (particularly founders).

Too often we see firms that from the outside appear to have grown their top line revenues, but have not been able to grow their profits in a corresponding manner. They haven’t been able to best control their growth because they resist to think beyond the incremental pricing habits they initially built their firms upon. (It’s even worse for financial advice firms whose revenues are still dependent on quantity of assets, or insurance products sold rather than quality of advice provided as they have even less control on their pricing).

These lopsided firms determine their pricing AFTER they have considered their current client base, their range of services they hope to offer, the talent of their teams and the direction they hope to take their firm.

Surely, I hear you say, the number one priority in the strategic planning for your growing firm is has to be it’s own mission/vision more rather than pricing?

Maybe and I’m open for the debate.

But my experience has been that too many advisory firms are consigning their growth potential to the limitations in their former pricing habits, forgoing the opportunity that exists on the other side of their current pricing beliefs about what they are worth.

Time and again, we have seen light blubs going off in strategic thinking of our clients after we have successfully helped them see the real value that their clients will pay for the outcomes they desired in their financial lives.

If you’re too busy in your advisory firm, try putting your prices up – and not just incrementally as per your early thinking.

So don’t change your proposition, or your client segmentation, or your pitching and then use a similar price to what you used prior as you won’t best earn the results from your efforts.

Obviously put in place some objective measures to ensure your new pricing is delivering real value in the minds of your target clients.