The bluntest weapon of choice – Price. 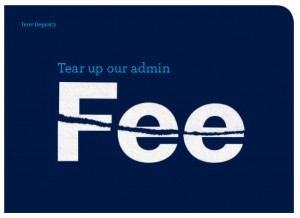 Expect to see a lot more of this type of advertising similar to this recent ad from the AMP giant.

Is there anything wrong with ‘specials’ and ‘discounts’ ? Of course not – my wife loves ‘specials’ and disapproves of my ‘buyer-mentality’ (I buy something when I need it after minimal price comparisons) versus her ‘shopper-mentality’ (she’ll shop for bargains that she may not need right now, but longer term will).

This type of advertising and competitive strategy will have a far greater effect on distancing financial commodities from financial advice than any legislation or consumer movement.

Take AMP – the group behind his advert.

From a commodity provider perspective, they hold a similar market position in the financial services market as, say, Coles in supermarkets, Boeing in aircraft, and Optus in mobiles.

But from an advice provider perspective, they hold a less clear position. Yes they have Australia’s largest population of ‘advisers’ but some might still regard these more as ‘distribution’ outlets rather than holding a position, like, accountants for instance.

What’s the effect of a ‘discounting’ strategy for their commodity products on a brand like AMP? Looking at it from their ‘commodity-provider’ role, it’s probably to be expected. Looking at it from their ‘advice-provider’ perspective, it could be given a hint as to a intent to dominate in ‘advice as a commodity’ end of the market, or it could be similar to giving your fourteen-year-old daughter a message that ‘good looks are all important’.

I’m sure people don’t buy Berkshire Hathaway because they are discounted.

I’m sure when people are undertaking important surgery, they aren’t as focused on the price of it.

Eventually the financial services giants will cease their consolidation and purchasing of ‘advice groups’ and have to learn how to dance (and prosper) in the fast-emerging world of financial advice.

Whilst financial planners know that financial platforms, products and services are just commodities, I believe consumers are uncertain the role of today’s ‘advisers’.

I also believe that building any brand on a ‘best price’ strategy will accelerate the division between the commodity end of the financial services and the advice end.

The consumers will figure it out pretty quickly.