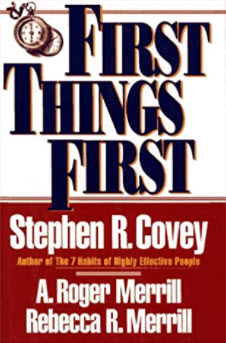 If you took some time to consider what are the “first things” in your business life, what would be your response?

Think about it for a second.

I remember attending a lecture by Roger Merrill soon after I started my business in early 1990’s. Merrill was on tour following the publication of this book “First Things First” which he co-authored with his wife and the 7 Habits of Highly Effective People author Stephen R. Covey.

Reflecting on your response to my opening question, I wonder if your response include something about “…being of value” to others in your business life (i.e. your team, your clients, your partners)?

During many training, coaching and consulting sessions I have run with advisory teams, a reply similar to “…being of value” is a common response.

Merrill’s lecture years ago exposed the truism that what is important to us all is often the same thing we take for granted, discount, or dismiss.

His point is that however simple it might sound to make our first things first, it will always be difficult.

A common manifestation of the difficulty of making first things first is how many advisory teams give away their advice.

Free Statements of Advice (SOA) are a good example.

An advisory team meets with a prospective new client.

Essentially they provide the detailed valuable advice before they have been paid. It can be even worse for some advisory teams who are not paid until the new client’s ‘money’ is finally transferred from one account into another.

I understand some advisory groups believe it to be non-compliant to accept payment before detailed product recommendations. That’s their interpretation of a confusing Corporations Act (Section Seven).

What I never understand and don’t believe is that ‘proving’ value can best be done by a detailed Statement of Advice.

I’m guessing Merrill would say until advisers firstly believe they are of value without props like SOAs, they will revert to SOAs which contains all their detailed advice.

The value isn’t the SOA.

The perfect SOA is as ridiculous as the perfect weather report.

Like a valued weather reporting service, the value is the advisory team.

But it won’t be valued by prospects and clients until it is firstly valued by the team itself.

There’s never been a better time to get first things first for your 2022 advisory team.

Photo from Angus and Robertson

For over 30 years, Jim has influenced, coached, and consulted advisory firms across Australia. His firm, Certainty Advice Group coaches, trains and is building a growing group of advisory firms delivering comprehensive, unconflicted advice, priced purely on value. The community of advisory firms aligns with Australia’s highest and only ACCC/IP Australia Certification Mark standard of comprehensive, unconflicted advice – Certainty Advice. He has authored four books regarding financial advice with his latest – What Price Value – available now in pre-release pending launch in March 2022.